Friday’s game represents a magnificent opportunity for Scotland, not only to win a game at the Euros, but to see England lose a game at the Euros at the same time. Seeing as these come around once every 25 years, you'd be a Sports Direct sized mug to miss this one.

The form book puts the rival teams on different trajectories, but what do we know about form and derbies? That’s correct, like any notion you may have had about taking it easy this weekend, it goes out the window.

In the past, supporting England meant being convinced that you could do a better job than both the gaffer and centre forward after a couple of cold frothy ones.

Peak England Fan occurred in the warm-up to Euro 2016, where everybody harangued poor Roy Hodgson into dropping Wayne Rooney, only to react “ROY YOU IDIOT, WHERE THE HELL IS WAZZA?”

This week you can’t move for tipsy and grinning Englishmen telling you in Gareth we trust, it’s coming home, and frankly it’s disgusting.

What better motivation than to wipe those smug smiles off their sunburnt faces? Eleven Scottish lads in particular will be ready to give it to them laldie.

Scotland being a relentlessly banterous nation, the larks often spill over into real life with hilarious consequences.

Exhibit A - the highlanders have produced two genuinely elite players in a generation and a half. That they are both left backs, historically the single most unloved, unsexy position on the pitch, is worthy of a Billy Connolly punchline.

Spare a thought also for Davey Marshall, who could have retired a hero after his gigantic performance against Serbia dragged the Tartan Army over the line in the play-offs.

Now the veteran keeper will go down in history after Patrick Schitck’s textbook halfway line lob caught him with his jobbiecatchers at half-mast.

After an anguished gasp that sucked the atmosphere out of Hampden Park, and a despairing train-doors-closing sprint, Marshall completed the perfect slapstick routine by getting all tangled up in the net like a big dumb fish.

He obviously immediately went viral and now sits on an immortal Scottish football pedestal with only Iwellumo’s magnum opus for company.

This being Scotland, there was bucketloads of glory in their opening defeat, giving England absolutely no reason to be complacent on Friday.

2-0 flattered the Czechs and the Scots responded brilliantly to going behind, keeping their heads despite this being the first international tournament any of them have played in and what was at stake.

The subs spiced things up, with Che Adams particularly impressing and James Forrest almost pulling off The Arjen Robben Goal™.

Scotland bagging a point against the odds? Get Tierney on pitch, gamble on Gilmour, bank on that fact that Jordan Pickford is statistically weeks overdue a clanger by now.

For the past 23 years, five million Scots have been visualising beating the English at Wembley in a major tournament – if it works as well for them as it did for Michael Jordan, they should win the psychic battle easily (even if England still have B-list cutlery wizard Uri Geller in their corner.)

Scotland have the best anthem in the competition and the stands are unlikely to go flat here like they did after Marshall’s howler. Roaring on regardless on the pitch, they also might just be the most competitive crop of bastards in at the tournament.

I guarantee you if you played Connect 4 with any of Scott McTominay, Robbo, Tierney, John McGinn, Stuart Armstrong or Ryan Christie, you’d be sweeping the counters off the floor in a matter of minutes. And as always, the Scots will take courage from their national documentary, Braveheart. They won that film twice.

Take Me To Your Leaders

Manager Steve Clarke has beaten Gareth Southgate before, as first team coach of the West Ham team that put the relegating touches to Southgate’s last full season in charge at Middlesbrough in 2009.

The fact that was Southgate’s last club role really goes to show what a random punt he was for the national job. Still, with managers, you tend to get whatever the exact opposite of the previous disaster is – England fans owe Sam ‘Gravy Train’ Allardyce a pint of wine of two for that. 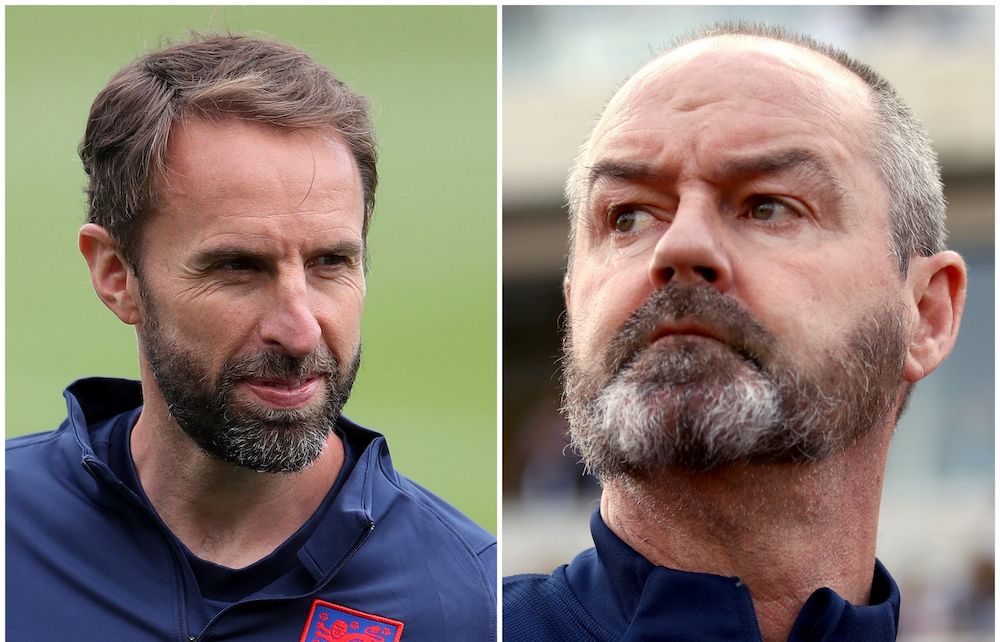 Across the technical area sits Clarke, officially the hottest assistant manager in the Premier League for donkey’s years. Jose’s one time muse shone briefly but brightly in his one Premier League job, guiding West Brom to an 8th place finish in 2012. Since then two record-breaking seasons at Kilmarnock bagged him the big gig at Hampden.

On paper both seem relative rookies - they boast just 4 club gigs between them – but a pair of sharp tactical minds, coupled with a deep understanding of team building and culture, have taken their respective nations to heights neither had seen in a generation.

England are in unfamiliar territory having won their first-ever opening game at the Euros.

If Southgate picks the same team that beat Croatia, the only players from Man United or Liverpool will be wearing blue shirts at Wembley.

What a time to be alive.

Where Scotland have a surplus, England have a makeshift left-back in Kieran Trippier, though logic would suggest we may see him make way for the more adventurous Luke Shaw here.

Trippier’s defensive diligence was deemed necessary against Kramaric, Modric and Atletico teammate Vrsaljko, not being a dick here but maybe Motherwell’s Stephen O’Donnell and John McGinn don’t command quite the same respect?

Regardless of who starts, expect the majority of England’s raids to come through Sterling, Mount and a potentially Shaw shuttling down that left flank. Foden and Philips on the right will have more of a threat to defend but equally more space to break into should Robertson and Tierney launch into full cavalry mode at any point.

How High Are The Stakes?

Pretty high, but not terminal – defending champs Portugal only got three points from the group at Euro 2016 and went on to win the ruddy thing. I’m not saying Che Adam’s is Ronaldo at the peak of his powers, but Scotland will need no encouragement to try and plunder a point here.

Ex-Aussie flick-on merchant Lyndon Dykes will have to get his Eminem hairdo on plenty of long balls to provide an outlet, as Scotland’s least risky option to nick the first goal.

There is, however, a quiet sense it could come down to who copes best with the emotional overload of competing in the original and best international rivalry on the planet.

Find a pub showing England v Scotland, get down with a gaggle of pals and make it a Friday night to remember.